The Ethereum price has bounced from last week’s selling and is now aiming at the highs once more.

The number two coin in the crypto market now has a market cap of $290 billion and hit another new record high last week even as Bitcoin struggled.

The announcement of more institutional investment products for ETH has boosted the coin and investors are looking outside of BTC after the recent gains, but also with the ongoing regulatory push, which is discussed later in the article.

Both of those time periods actually marked a high in ETH before a correction.

The price of ETH will look to test the highs at $2,600 this week and a continued bounce in BTC above $50k would help to fuel further gains in the market.

Sol was one of the strongest coins of the week and has had a big 2021 with the coin now at 13th place based on its market cap of $10.3bn. The coin soared 33% on the week and one crypto analyst sees a good future for the coin. 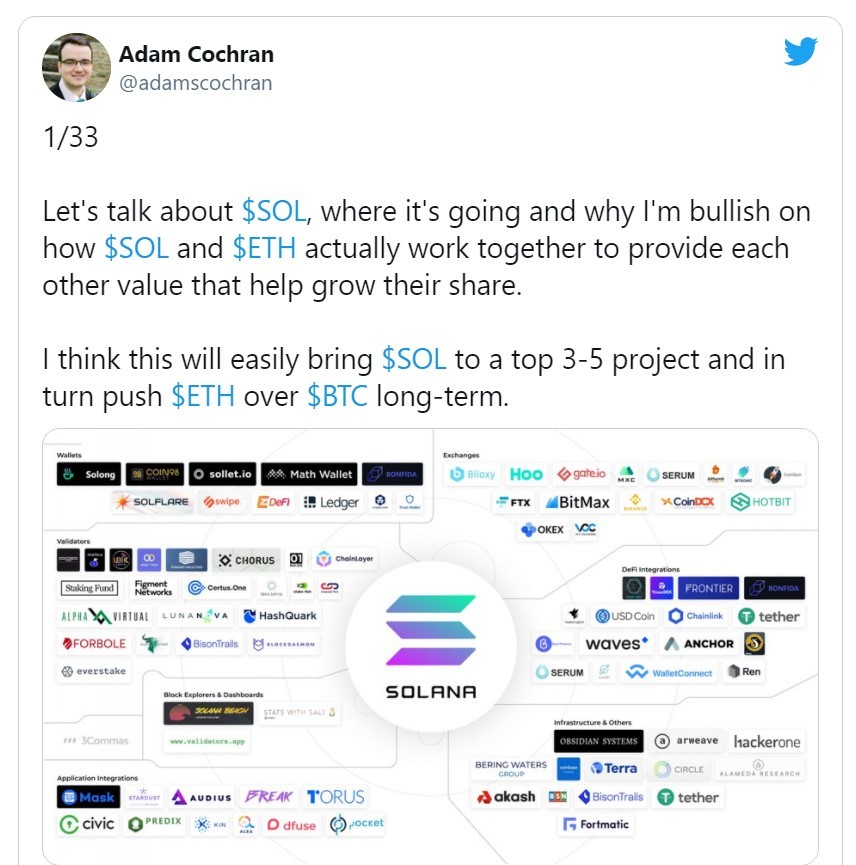 In a lengthy Twitter thread, Adam Cochran laid out his case for further gains in Solana. These are some of his thoughts:

Why I think this is an interesting investment opportunity right now is timing. BSC bloomed to an $88B mcap due to retail appetite for consumer scale defi. But after a few months there infrastructure is starting to struggle under the bloat. When we look at the adoption J-curve of ecosystems, it usually takes around 6-8 months after a funding boom for teams to start rolling out consumer ready products and given that Solana based funding exploded in the past 2-3 months, that puts us right on queue.

He also saw the ability for ETH and SOL to co-exist well in the ecosystem and that Solana would be in the top 3-5 coins. SOL saw record highs at the 50 level in the last two days and the coin has powered higher from a $10 price in February.

CELO was the best-performing coin this week with a 43% return and the coin has moved to number 80 with a market cap of $1.24bn after German mobile giant Deutsche Telekom made an investment into the defi platform.

The telecom giant was said to have made a “significant purchase” of the CELO token via its strategic investment fund, the Telekom Innovation Pool. Deutsche Telekom has also joined Celo’s ecosystem with a network of over 130 members, where the company’s subsidiary T-Systems MMS will be a validator implementing the Open Telekom Cloud.

Deutsche Telekom has highlighted another sector that is open to crypto investments and it could lead to copycat investments by other competitors.

CELO has resistance at the $7.00 level and a move above that price would see further gains in the coin.

The market has been abuzz with regulatory talk over the last couple of months and the last week saw moves in that direction.

Turkey is set to roll out restrictions on cryptocurrencies with the country’s central bank governor saying they would apply them in two weeks, adding that the bank would not ban cryptocurrencies

Turkey’s central bank chief revealed that the bank would be rolling out cryptocurrency regulations in the coming weeks. Governor Şahap Kavacıoğlu said this while speaking on the state-run channel TRT during the weekend.

According to the governor, Şahap Kavacioglu, the regulations would bring some structure to the market, but said: “You cannot fix anything by banning crypto, and we do not intend to do this.”

The governor also said there were concerns about funds that were leaving the country via cryptocurrencies. Turkey is trying to protect the value of its currency after a rise in inflation, but the reason that cryptos were invented was to avoid the impending collapse of monetary systems and governments are trying to protect those systems.

Although the governor didn’t give details on the proposed regulations, he voiced his concerns about the funds leaving Turkey via cryptos. He stated that they need to overcome the alarming amounts of funds leaving the country through such mechanisms.

The top financial regulator is looking at taking this action after it emerged that the firms have yet to comply with new regulatory laws introduced in the country. The chair of the Financial Services Commission, Eun Sung-soo, announced the move to a National Assembly policy committee. The regulator received no applications for the Virtual Assets Service Providers (VASPs) compliance program in the country.

The next country that could introduce some regulation is the USA, although the SEC has been talking previously about this possibility.

The Biden administration is in what’s been described to me from people close to them as the early stages of developing a regulatory approach to the crypto market… it’s being debated inside the Biden administration. From what I understand, SEC Chair Gensler… is waiting for some direction from Treasury for the overall policy before he develops a more specific regulatory approach to crypto, which will likely be the types of enforcement actions he goes after.

Charles Hoskinson, the founder of Cardano said on a Youtube video:

There’s no reality that a government as regulation-friendly as the United States government will allow an industry with a market capitalization of over a trillion dollars to be unregulated or to live in this weird gray area of enforcement.

Both commentators agreed that BTC and cryptocurrencies were here to stay.