Ethereum has continued its relentless charge with the coin blasting above the $3,600 level and then $4,000. As of Monday morning, ETH trades around the $4,188 level.

It’s no coincidence that Bitcoin has toiled this week as the coin came close to $60k but is not seeing the flows of early-2021. The investment is starting to be spread around and new highs for ETH and Litecoin have seen a renewed enthusiasm for altcoins, with analysts looking to find the next big mover.

Ethereum is benefiting from institutional interest and the desire of traders to hold the coins off exchanges. ETH continues to be staked ahead of the V2.0 upgrade and that also reduces the supply of coins available for purchase at the exchanges, while demand is rising.

Ethereum now has a market cap of almost $500bn, compared to Bitcoin’s $1 trillion, as the top two coins in the digital space light the path for the rest of the market. It’s possible that the recent regulatory talk from the Securities and Exchange Commission, alongside the move towards central bank digital currencies is also stunting support for BTC.

Litecoin has finally seen a new record high for the first time since late-2017. The coin trades at number 10 in the list of coins by market cap with a valuation of $33bn and support here could pave the way for further gains in LTC.

As we saw with the likes of Dogecoin, when coins hit new highs and make the headlines, it brings a rush of FOMO traders eager to avoid missing a potential wave higher. 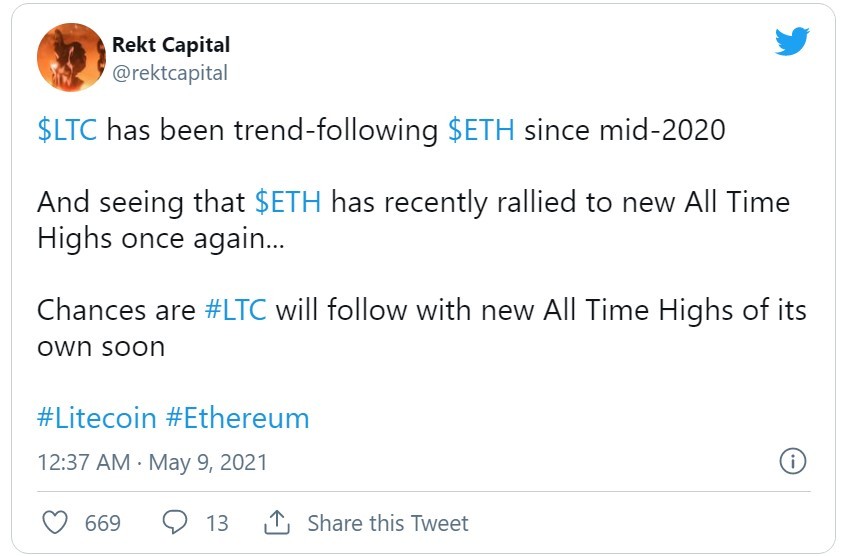 Twitter analyst, Rekt Capital called the move in LTC, and we also shared bullish comments on the coin in last week’s article. Looking at ETH/BTC, the analyst saw that LTC had been tracking ETH since mid-2020 and LTC was always moving in conjunction with BTC but is now seeing flows of its own as BTC hits a ceiling and institutional investors move outwards into other coins.

Blockchain research firm, Glassnode also noted a jump in active Litecoin addresses since the beginning of 2021, which indicates a growing demand for LTC. 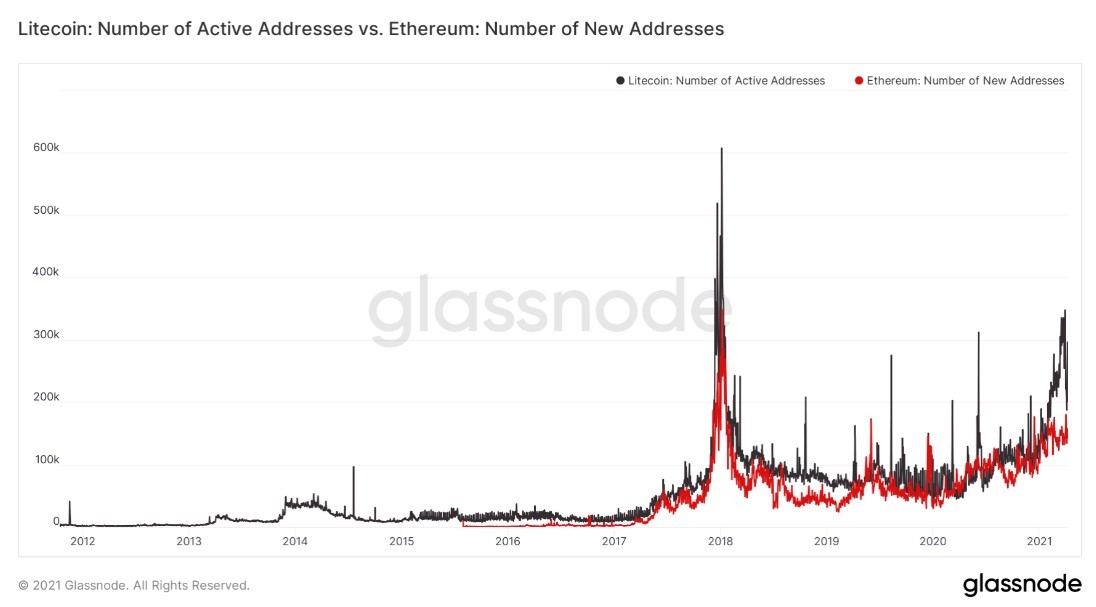 Litecoin has seen ETF investment products coming to the market recently and, over the past year or so, we have shared many exciting partnerships, where LTC is being used to transact in the real world.

LTC has seen a high of almost $413 and the previous ATH will now be the key level for support.

Ethereum Classic has long been a sleeper token, but the coin has finally woken up with a strong rally from April. ETC was trading around its familiar cap at $20 in April but has seen a sharp move higher to test $180.

ETC was created in 2016 as the result of a hard fork from Ethereum, following the hack of the popular DAO platform. The coin has since been lost in the shadows of Ethereum but the development team has been busy over the last year with upgrades and the coin was looking to keep pace with the upgrade of ETH to V2.0.

The move higher in ETC has seen the coin rocketing back into the top 20 coins where it stayed for a long time in the early crypto years. The market cap of the project has jumped from $4bn to $14bn with the coin at number 16 in the list.

Ethereum Classic is actually the original incarnation of the Ethereum chain. The ETC network is aimed at developers looking to run smart contracts. The hash rate of the Ethereum Classic network has steadily been climbing over the past six months alongside the rising price of ETC, helping to make the network more attractive to interested miners and increasing the overall security.

The ongoing rally in ETH should see further interest in the ETC coin.

Shiba Inu (SHIB) the self-proclaimed “Doge Killer” has rallied 140% after the coin was listed on Binance. SHIB powered into the top 20 coins by market cap and the coin is up 1,000% in 48 hours.

Nicknamed the DOGECOIN KILLER, this ERC-20 ONLY token can remain well under a penny and still outpace Dogecoin in a small amount of time (relatively speaking). Popular worldwide, and already up thousands of percent, Shiba token ($Shib) is the first cryptocurrency token to be listed and incentivized on ShibaSwap, our decentralized exchange.

The coin doubled after Binance announced it would list SHIB in its innovation zone and now trades at $0.000032. Shiba’s website claims that 50% of the token supply has been locked into Uniswap for liquidity purposes, while the remaining 50% has been sent to Ethereum co-founder Vitalik Buterin as a “burn” gift. These moves mean that,

…everyone has to buy on the open market, ensuring a fair and complete distribution where devs don’t own team tokens they can dump on the community.

LEASH was planned to be a rebase token which was pegged to the price of Dogecoin. The coin has now been set free from any peg and will trade freely and has only 100k in circulation. The development team also have another coin, BONE, in the works, which the group claims is the ‘Dogecoin killer,’ adding that “Shiba Inu Bone, takes the power of Defi to the next level.”