April 2021 marks the tenth anniversary of Bitcoin creator Satoshi Nakamoto’s disappearance, an event that passed control of the blockchain to its community.

Nakamoto sent his last message to other developers in 2011. Among those is a note that reads: “I’ve moved on to other things. It’s in good hands with Gavin and everyone.” That message refers to Gavin Andresen, one of the earliest Bitcoin developers.

In the ten years that followed, the crypto community has engaged in widespread speculation on Nakamoto’s true identity—but it has reached no definite conclusion.

One of the most popular candidates for Nakamoto’s true identity is Hal Finney. This theory is largely based on a Forbes article dating back to 2014.

Finney was a cryptographer who was involved in Bitcoin’s development from a very early date. He also communicated with Satoshi Nakamoto directly. An analysis between Finney and Nakamoto’s writing styles seemingly confirmed shared writing styles.

Additionally, Finney had a neighbor named Dorian Satoshi Nakamoto. Finney may have used Dorian Nakamoto’s name in order to direct attention away from himself.

However, the author of the original Forbes article, Andy Greenberg, ultimately discounted the theory upon hearing a denial from Finney himself.

Was Dorian Nakamoto the Creator? 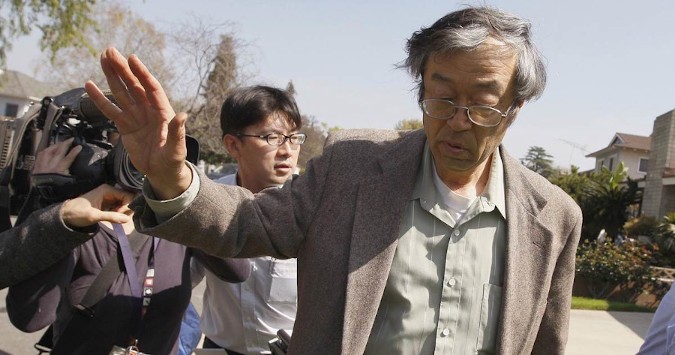 Some have speculated that Dorian Nakamoto himself may have been Satoshi. That theory was investigated by Leah McGrath Goodman for Newsweek in 2014.

During that interview, Dorian Nakamoto stated: “I am no longer involved in that… It’s been turned over to other people… I no longer have any connection.” Those statements were seemingly taken as a confession to past involvement with Bitcoin, but Nakamoto later clarified that he was referring to past work for military contractors.

Despite Dorian Nakamoto’s denial, his image has been widely used, making him the face of Bitcoin regardless of his actual role in the cryptocurrency’s creation.

Other Candidates for Satoshi

Another candidate for Satoshi Nakamoto is Nick Szabo (above center), a cryptographer who designed a Bitcoin precursor called “Bit gold” in 1998. Researcher Skye Grey used writing style analysis to connect the two identities in 2013.

Despite this, Szabo has outright denied that he is Nakamoto: “I’m afraid you got it wrong doxing me as Satoshi, but I’m used to it,” he stated in 2014.

Hashcash creator Adam Back (above left) and b-money creator Wei Dai (not pictured) are sometimes believed to be Nakamoto as well. Both monetary technologies are precursors to Bitcoin, and both are cited in the Bitcoin whitepaper.

Finally, Craig Wright (above right) has claimed to be Satoshi Nakamoto repeatedly. He has motives for doing so: Wright has created a Bitcoin competitor called Bitcoin SV and is involved in numerous lawsuits that attempt to collect early Bitcoin address balances. This has led the majority of the crypto community to denounce his claims.

Was Satoshi Nakamoto a Group of People?

On the question of who authored the orignal Bitcoin whitepaper, McAfee commented: “How they decided who would write the paper, I don’t know.”

Others have speculated that Bitcoin is actually a government project. The CIA or NSA could have created Bitcoin as a “honeypot” trap: while Bitcoin provides a basic level of privacy that appeals to criminal users, it is also a system that is ultimately traceable.

Those who advance this theory claim that the Japanese words “Satoshi Nakamoto” can be translated to “central intelligence agency.” However, that is very loose translation. Even assuming that translation is correct, it is equally plausible that Satoshi Nakamoto was formerly involved with the CIA and used the term ironically.

Will Nakamoto’s Identity Be Discovered?

It seems unlikely that Satoshi Nakamoto will ever reveal his true identity. Some information can be glimpsed from online messages, such as time stamps, IP addresses, and mining patterns. Yet that has data has largely been exhausted.

All that remains are Nakamoto’s known Bitcoin addresses. Currently, there are over 1 million BTC ($57 billion) in those addresses. If any of those coins move, analysts would be able to observe Nakamoto’s spending patterns and potentially deduce his identity.

However, after more than ten years, it is unlikely that Nakamoto will ever return to move his Bitcoin, leaving his identity a mystery—possibly forever.